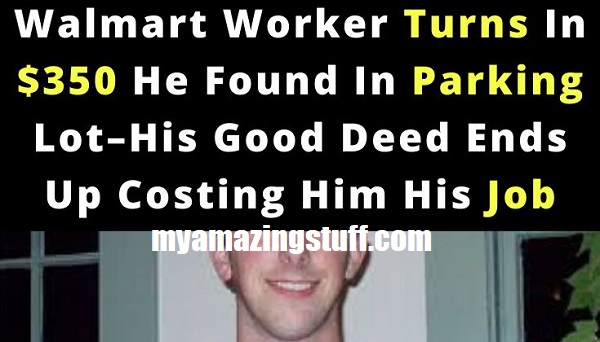 Wal-Mart employee Michael Walsh found $350 in the Niskayuna, N.Y., parking lot and turned in the lost money to his manager. The events that followed caught Walsh completely off guard.

Walsh, 45, was a Wal-Mart maintenance worker for 18 years, performing such tasks as picking up garbage and collecting wayward shopping carts before being fired over a seemingly harmless good deed.  He found $350 in the parking lot and turned the money in to his manager, but was terminated for “gross misconduct.”

In an interview with the Times Union, Walsh states that he found a $5 bill in the parking lot and brought it to his manager at once, but found stacks of cash in different denominations — $350 in total — when he resumed his duties outside. The Times Union reports that the money “was not in an envelope and bore no identification.” Walsh put the cash in his pocket before continuing to work.

Walsh went to the manager with the intention of turning in the lost $350 after finishing his tasks in the parking lot, when he encountered a harrowing sight. According to Walsh, “a woman was yelling at a manager, freaking out that she lost her money and I got nervous … I kind of froze and didn’t want any trouble.” The Times Union reports that he suffers from “anxiety issues,” so Walsh says that he performed other work tasks until the pandemonium had subsided and he had calmed down. Approximately 30 minutes later, he turned the money in.

A few days later, Walsh was brought in to his manager’s office and interrogated about the money and why it had taken him so long to bring it to the proper personnel. Walsh claims that the manager showed him video surveillance footage indicating that half an hour had passed before he turned the money in, and tells the Times Union, “they didn’t let me explain and said they knew what happened. They told me how it happened in a way they wanted it to go … I got treated like a common criminal.”

Walsh’s termination is even more distressing when its timing is taken into consideration. The Times Union notes that he has been denied his 20 percent employee discount during prime holiday shopping season, and since he had only worked for Wal-Mart for 18 years prior to his termination, Walsh is no longer eligible for the 10 percent lifetime discount card given to 20-year employees.Business Insider reports that activist groups are rallying behind Walsh to prevent Wal-Mart from wrongfully terminating and mistreating employees in the future. Jess Levin, a spokeswoman for Making Change at Walmart, tells Business Insider, “we cannot allow America’s largest employer to keep treating their employees as disposable and taking away their jobs for no real reasons.”

Amid the backlash Wal-Mart received over this incident and the termination of another employee on the same day for redeeming $2 from recyclable bottles and cans left in shopping carts (mentioned in the same Times Union article), company spokesman Aaron Mullins had this to say to Business Insider about Walsh’s case:

“We have high expectations for our associates that include policies and standards grounded in integrity and truthfulness. We take all associate matters seriously and have procedures in place that enable us to conduct thorough investigations and take action, if necessary. Regarding this specific associate matter, we have nothing further to share at this time.”