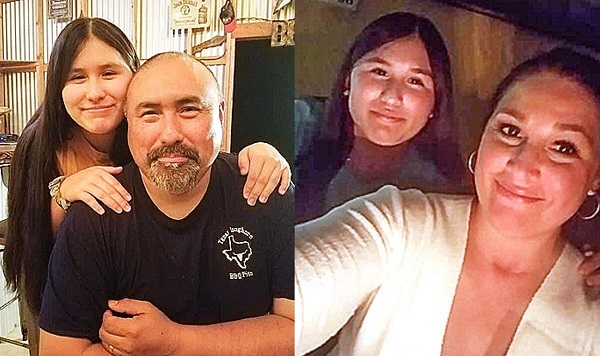 Teacher Irma Garcia was gunned down in the atrocity on Tuesday. Her husband Joe died two days later from a heart attack, which his family blamed on grief. Now daughter Lyliana, 15, has vowed to her parents: “Your names will not be forgotten.” The tribute came as US President Joe Biden joined mourners in Uvalde, Texas, yesterday. Irma, 48, was killed along with another teacher, Eva Mireles, 44, and 19 pupils aged nine to 11 when gunman Salvador Ramos opened fire at Robb Elementary School.

One of the last things Mr Garcia did was lay flowers at a memorial for the victims in the square outside the town’s courthouse.

A cross bearing his name has now been added and mourners are leaving flowers and cards for him too.

At the weekend, Lyliana left a message there. It read: “Dad, I know this was too much for you.

“Your heart could not take it. I will spend the rest of my life fighting for you and mum.

“Your names will not be forgotten. Your daughter, Lyliana.” Joe and

Irma – who also had sons Cristian, 23, and Jose, 19, and daughter Alysandra, 13 – will be laid to rest on Wednesday. The couple, who married in 1997 after falling in love at high school, are being buried together following a private ceremony.

An online fundraiser organised by Irma’s cousin has raised almost £2million for the family. The US President and First Lady Jill Biden visited Uvalde yesterday to view the memorial and pay their respects. He was seen hugging Mandy Gutierrez, the school principal, during the visit.

The family of another victim – 10-year-old Annabell Rodriguez – was inconsolable as they read the tributes to her at the memorial. Irma and Eva had valiantly tried to shield their fourth grade students as Ramos stormed into the classroom just after noon. He used an AK15 he bought days earlier on his 18th birthday before police finally shot him dead. Before arriving at the school, Ramos had shot his gran Celia Gonzalez, 66, in the head. She is still being treated in a hospital alongside some of children who survived.

Lauren said: “I know what it is like to weep.”