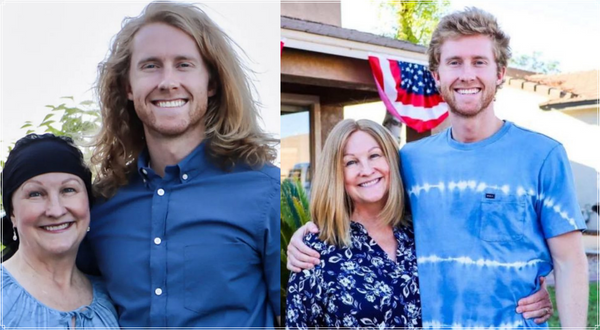 An Arizona man has grown out his hair so he can create a wig for his mother who lost her hair after a protracted battle with a benign brain tumor.

We are touched today by the son’s compassion for his mother, which is uncommon these days.

Four years ago, Melanie Shaha had painful radiation therapy for a benign brain tumor that kept coming back, causing her to lose her hair permanently.

Over the past two years, her kid with naturally strawberry blonde hair has let it grow out. The 27-year-old Shaha started working toward his goal at the beginning of 2020 and waited until it had grown 12 inches before cutting it and having a wig made for his mother.

The mother of six was in awe when she received the gift she could never have imagined in her wildest dreams. When you wear a hat everywhere, you stand out like a sore thumb. Although I don’t mind being sick, I don’t like how I look.

Melanie has had a benign tumor on her pituitary gland since 2003. However, she argued, “it was in the wrong position and destroys critical things, so you can’t leave it.”

After her initial diagnosis, she underwent neurosurgery, but three years later it returned, necessitating a second surgery. In 2017, she had to get radiation to prevent it from developing, and in the end, it shrank.

As a result, she lost all of her hair permanently. As she remarked, “I didn’t know it would happen, but my hair began to fall out about three months after radiation.” “And the doctor said it won’t come back.”

Matt was constantly worried about his mother, who had to wear a hat to conceal her bald head. During one of his school breaks, he suggested, “Maybe I’ll grow it for you.”. Then, he continued, “it just kind of clicked: Well, why don’t I?”

While he was a student at Brigham Young University, he could not let his hair grow out because it was against policy. In March 2020, when the pandemic hit and most schools were in online mode, he was allowed to grow his hair. At the time, he was also a senior in college at home.

Melanie stated, “I realized it was a lot to ask and… there might be a point when it’s not realistic for his profession, his sports, or his relationships. Melanie broke down in tears when he cut his hair in March 2022. “Matt’s generosity, compassion, and sacrifice have been truly remarkable,” she said. There has been a lot of love and care from him.

The hair was shipped to Compassionate Creations, a Newport Beach, California company that creates customized wigs for people with hair loss. Melanie says there are numerous places where you can donate your hair, but only a few businesses will use the hair to make a wig for you.

Melanie wore her son’s strawberry blonde wig once the wig was ready and declared that she looked like herself once again. In mid-June, the wig finally arrived. Seeing that project “just kind of come to fruition and how wonderfully it worked out,” as Matt put it, “meant the world to me.

The story serves as a gentle reminder to care for our parents and treat them with respect by giving them our assets.