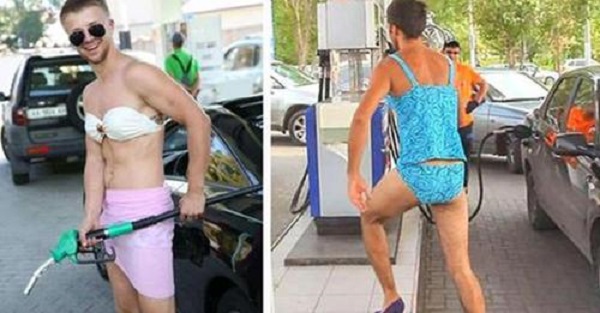 Imagine a world where you can get free fuel. What a world that would be, right? Seemingly an impossible thought, a gas station, stationed in Russia (yes, the pun was fueled by this) has decided to offer free fuel to its patrons. But, what is the catch? There has to be one, right? Who in their right mind would offer free gas? It’s one of the most valuable things that exist in this world and anyone offering it for free must not be right in the head. The catch is far more hilarious than you might imagine… or possibly degrading – depending on your viewpoint. But, hey, free gas, is free gas right? This Russian gas station has stated they will give FREE FUEL to anyone who shows up in a bikini. Now, Russia is a country that is famous for many things. Some of these things are their amazing architecture, foods like borscht and beef stroganoff, and one simply cannot forget their vodka! Russians are super keen on vodka of intense strengths and it truly is a wonder at how much of it they can put back.

Another thing they are famous for is the amount of insanely beautiful women that come from Russia. This may or may not be thanks to Russian male-order bride websites advertising a “loving” and beautiful wife to Americans.  This was understandable back in the day where lonely men would advertise themselves as a husband to be whilst they traversed the planes of the not-yet-developed American planes. These days, who knows what those reasons are.

Considering this, the gas station probably had it in mind that they would attract these apparent beautiful women to their facility and they would get to gaze and gawk over their very exposed physiques. I’m sure they did not expect what came next! Some of the men from that town in Russia had heard of this amazing special offering free fuel, they flocked from all over, adorned in a borrowed bikini. Or their own (you never know!) Their advertisement read that there was free gas for anyone in a bikini, right? Well, that did not specify what gender, and in this day and age, one can’t afford to expect a man not to wear a bikini! That would be discriminative, to say the least.

There were women in bikinis as well, but the funniest part was the men. These brave men did a fabulous job at rocking their bikinis. Some of the photos were posted, and of course, they went viral. They flaunted their stuff in style and with an air of flamboyance. Some even finished the look with a pair of high heels, to which, I might add, they had surprising skill. If you’re gonna look the part you gotta be the part. This was definitely running through some of the minds of these bikini-wearing men that day. Loopholes are very exciting when discovered, especially when free fuel is involved! People will take advantage! Next time, this gas station should consider being a little more specific when it comes o their sneaky deals. Otherwise, they could keep this up and continue enjoying the laughs!