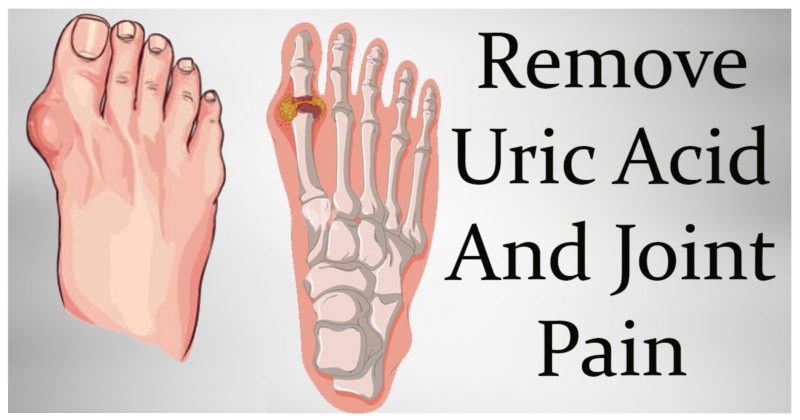 Gout is a health condition which is a type of arthritis caused by the accumulation of uric acid. The increased amount of uric acid in the body causes the formation of crystals in the joints which result in inflammation and strong joint pain. The usual treatment for this condition are medications such as non-steroidal anti-inflammatory drugs which often cause serious side-effects.

We will try to explain this condition in more details in order to help you treat its symptoms naturally.

Some foods we consume are rich sources of the naturally occurring substance purines, which are turned into uric acid in the body. Purines are healthy and the body needs them for the DNA and DNA replication. Yet, in the case of a high-protein diet, the risk of gout is elevated, since foods like red meat, salmon, sardines, organ meat, herring, and oily fish, lentils, peas, and beans, are high in purines. Therefore, one needs to limit their intake in the case of gout.

To use it as an energy source, the body needs to convert fructose into glucose, and as a by-product, this process creates uric acid. The elevated uric acid levels trigger the nitric oxide production, which keeps the blood pressure low. The excessive intake of fructose turns it into LDL, which is then stored in the body as fat. This is not the case with fructose in fruits, but the one extracted and added to foods and drinks. These effects of fructose have been scientifically confirmed. The Journal of Paediatrics published a study which involved 5,000 teenagers, and found that the more juice and fizzy drinks they drank, the higher their blood pressure and uric acid levels were.

Additionally, the British Medical Journal (BMJ) published another study which estimated the frequency of gout in over 46,000 men for more than 12 years. They discovered that the consumption of fizzy rinks raises the risk of gout, and actually, it was double in people who drank two or more fizzy drinks daily. Another study analyzed 80,000 women for over 22 years, and 778 of them developed gout.

The link between these drinks and gout was confirmed once more, as researchers found that women those who drank one sugary drink daily were 74% more likely to develop gout in comparison to the women who consumed less than one drink a month. Those who drank 2-3 sugary drinks daily had a 2 ½ times higher risk of developing gout.

Moreover, alcohol intake raises the risk of gout. According to a 2004 study published in Lancet, beer poses the highest risk. Yet, make sure you drink moderately and consume plenty of water.

TO PREVENT GOUT AND REVERSE THIS CONDITION, YOU SHOULD: