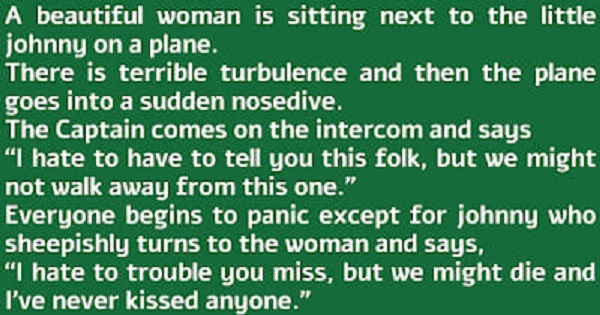 A beautiful woman is sitting next to the little johnny on a plane.

There is terrible turbulence and then the plane goes into a sudden nosedive.

The Captain comes on the intercom and says

“I hate to have to tell you this folk, but we might not walk away from this one.”

Everyone begins to panic except for johnny who sheepishly turns to the woman and says,

“I hate to trouble you miss, but we might die and I’ve never kissed anyone.”

The woman is at first taken aback but after a moment realizes she might as well make the kid happy in their final moments.

She passionately kisses him.

“Sorry to bother you again after such a lovely kiss, but we might die and I’ve never felt a bre@st.”

Again the woman is taken aback but decides there is no harm in it and slides his hand under her shirt.

After a good long feel, the little Johnny again says

“you’ve been so kind already but please, I don’t want to die never having gotten a bl0w job.”

Already committed to helping this boy have new experiences before they die, the woman smiles and begins to undo his belt.

Just then the plane levels off.

As everyone exits the plane they shake hands with the captain and congratulate him.

The woman walks off the plain she says

“thank you so much for saving us from certain death.”